On Catching Up With Taylor, you’ll find entertainment news, interviews, and other musings.

Catching Up With Taylor Leddin 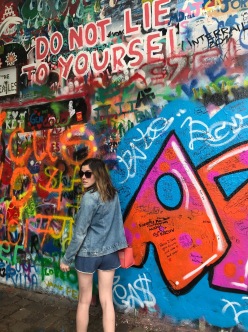 Hello! Let me begin by introducing myself. My name is Taylor Leddin and I am a writer from Chicago. Since the beginning of (my) time, I have been a huge fan of all things film and television. My dream as a child was to work at a Blockbuster Video. Being that their doors closed prior to my turning an age legal for work, I had to come up with a Plan B. After finishing high school, I opted to stay home for my first two years of college. During this time, I worked as a background actor for various films, television shows and commercials filmed in Chicago. I also took a variety of acting classes and learned the ins and outs of professional acting. However, I did not receive the “bug” many actors have often described feeling when beginning their career. I found that my “bug” was with writing. Since graduating from Illinois State University, I have been freelance writing for a number of websites and publications and have been working hard on expanding my portfolio. One day, I hope to write for film and television. But for now, I am enjoying learning about the different facets of writing and love taking on new projects. For more information, feel free to email me at taylorleddin@gmail.com

One thought on “About”

Currently re-reading Gatsby to figure out how to navigate the 20s 🥂
The 20/20 Experience
☺️ was my face all day lookin’ at the mountains
An attempt to become the new face of @disaronno_official
💚
Lots to be thankful for with these guys 🧡
💭 💭 💭
Last month I had the privilege of presenting to junior high students on the world of writing and publishing! (And, yes, it’s come to my attention that I talk a lot with my hands)
Italy, 2017. Had just found out a story I’d written would be a magazine cover. Felt like I was on top of the world 🌍 now I’m in a frozen tundra and the magazine is out of business so I must reminisce 🌟
Follow Taylor Leddin on WordPress.com
%d bloggers like this: